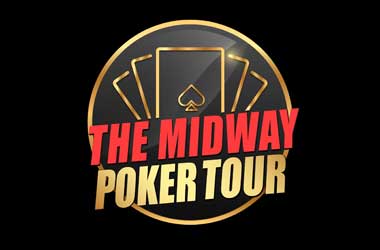 The inaugural Midway Poker Tour will start out in the Chicagoland area on October 2-4, 2020.

The tournament will take place in partnership with the 4 K.I.D.S Sake charity, a not-for-profit organization based in Illinois, providing support to children throughout Northern Illinois and other areas in the Greater Chicagoland. The Sheraton Suites Chicago Elk Grove will play host to the live action.

Players kick off the action with 30,000 in chips, played in 30-minute levels on Day 1, increasing to 40 minutes on Day 2. Re-entries are also allowed, and if players advance from Day 1 more than once, they will only be able to carry their largest stack with them through to Day 2.

There will be two starting flights, the first one taking place at 2pm local time on Friday, October 2, the other scheduled at noon on Saturday, October 3. Remaining players will meet again on Sunday, October 4, during which a winner will be crowned. The final table will be livestreamed.

In the lead up to the tournament, Sheraton will run a number of cash games which will also be streamed. The tournament is open to players 18 years old and above.

The Midway Poker Tour is the brainchild of American poker pro Dan Bekavac, a native of Oak Lawn, Illinois. Throughout his career, he won two Mid-States Poker Tour (MSPT) titles, including the 2019 MSPT Potawatomi Main Event where he earned $126,998, his biggest score to date. The Midwest poker pro has over $290,000 in lifetime tournament winnings.

Bekavac came up with the idea while developing an app for poker players back in 2017. The Midway Poker Tour becomes the first and only mid-major tour that features a full livestream of the tournament, from start to finish. Bekavac and his team organized the tournament in preparation for the launch of the app they’ve developed for around three years.

Revolving around the concept of “For Players, By Players“, the Midway Poker Tour’s main goal is to provide a unique tournament experience for players and grow to become the biggest mid-major poker tour by the end of 2021. Among the players who will take part are Pat Steele, Alan Cutler, Nick Pupillo, Ryan Phan and Kevin Saul.