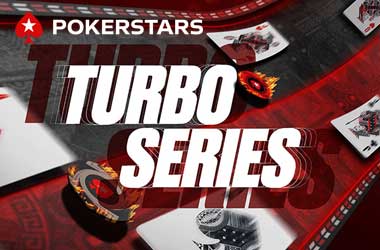 The popular Turbo Series is currently underway at PokerStars, featuring 134 action-packed events with over $25 million in combined guarantees.

If you’ve never tried taking part in the Turbo Series before and are hesitant to take a shot because of its fast-paced structure, we’re giving you a guide on the most effective strategies to use in this format, as well as some tips to help you stay longer in the game.

Improve Your Chances Of Winning Turbo Tournaments With These Tips

When it comes to turbo tournaments, forget about the word “patience“. The main goal is to win as many chips and build your stack right from the very first hand.

The aggressive player will always have an edge in this type of format, and the only way to get ahead right from the beginning of the game is either to accumulate chips by forcing your opponents to fold, or just make the best hand.

Because you’re playing a stupidly fast format, the size of your stack will also change rapidly. It can either grow quickly or dwindle down just as fast, so don’t be afraid to take calculated risks if it means staying ahead of the competition.

When you think the rewards at stake will significantly improve your chances at winning, then go for it!

You don’t always have to rely on strong hands. You can still build your stack even with weak hands. This is especially true in turbo tournaments where players will most likely find themselves in all-in situations much quicker, compared with regular speed formats. Meaning the number of hands you’ll get to see before getting caught up in a push or fold scenario are limited.

The best thing you can do is to utilize those small edges you have even if they don’t necessarily constitute a strong hand.

When competing for a pot, avoid calling. Consider raising and take advantage of re-steal opportunities. When an all-in is expected, be the last player to be on the attack. It will allow you to win the pot even without a fight.

In turbo tournaments, you must prioritize short-term EV. This is because in this type of format, tables frequently break, and players are often moved around to fill empty seats. Each blind level also involves fewer hands.

What this means is that your opponents won’t have that much time to read your strategy and adjust their play accordingly. So be ready to make unbalanced plays that can make you win chips instantly, take that short-term action, and worry less about repercussions, because you will most likely avoid the punishment as play progresses.